The NLRB sends a clear message to employers 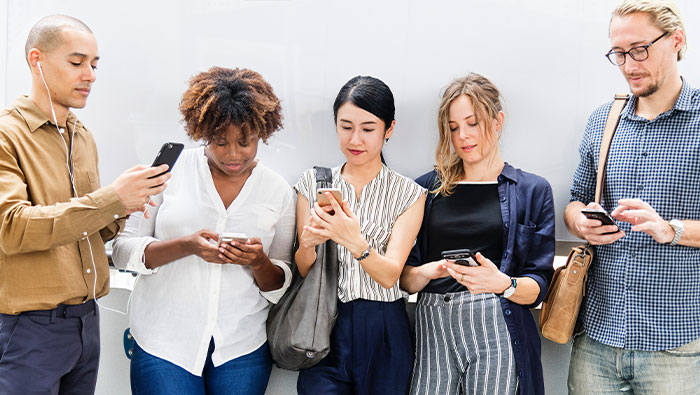 — think twice before striking back at employee social media comments

Social media has rapidly transformed the nature and scope of employee commentary about the workplace. With one click, employees’ electronic postings can reach supervisors, co-workers, clients and customers. Vexing issues arise in determining whether employees are immune from disciplinary action or termination of employment for speaking their minds on social media. The law is evolving as it refines standards applicable to traditional modes of workplace communications (e.g., “water cooler” discussions or face-to-face encounters) to the realm of social media.

Section 7 of the Act provides employees with the right to organize and engage in “other concerted activities for the purpose of collective bargaining or other mutual aid or protection.” An employer violates Section 8(a)(1) of the Act by interfering, restraining or coercing employees in the exercise of their Section 7 rights, which can include conversations via social media such as Facebook, Twitter or blogs. Yet, the NLRB has recognized that online employee communications can implicate legitimate employer interests, such as the right to protect its business concerns and orderly operations. There are often unclear lines of demarcation between these competing rights.

Jillian Sanzone (“Sanzone”) and Vincent Spinella (“Spinella”) were employed at Triple Play Sports Bar and Grille in Watertown, Connecticut. In early 2011, upon filing her tax return, Sanzone discovered that she owed income taxes to the state of Connecticut apparently due to her employer’s withholding practices. Another restaurant employee informed Sanzone that she also owed taxes. Concerns spread among the employees about their employer’s withholding calculations, and the owners arranged for staff to meet with the restaurant’s accountant and payroll company.

Sanzone and Spinella never made it to the scheduled meeting, as their social media activity sealed the fate of their employment beforehand. A former restaurant employee posted the following status update on her Facebook page, “Maybe someone should do the owners of Triple Play a favor and buy it from them. They can’t even do the tax paperwork correctly!!! Now I OWE Money…[expletive deleted]!!!!” Several of the former employee’s Facebook friends, including restaurant employees and customers, joined in. As the dialogue ensued on the Facebook page, Spinella clicked the “Like” button under the former employee’s initial status update and Sanzone posted a single comment stating “I owe too. Such an [expletive deleted][.]” (referring to one of her bosses). When the restaurant owners learned of this social media activity, they promptly fired Sanzone and Spinella, construing their participation in the Facebook discussion to constitute disloyalty.

Sanzone and Spinella contended that they were wrongfully terminated in violation of the Act. An administrative law judge agreed and ruled that the employer responded unlawfully to the employees’ protected concerted activity. The restaurant appealed to the NLRB, which heard the matter through a three-member panel.

Before the NLRB, the restaurant did not dispute that the employees’ participation in the social media activity was concerted as part of a sequence of employee communications about withholdings that initiated in the workplace, or that its employees had a protected right to participate in a Facebook discussion about their tax concerns in furtherance of group action. Instead, the employer contended that the two employees wrongfully adopted the former employee’s allegedly defamatory and disparaging comments on her Facebook page and therefore lost the protection of the Act.

The NLRB addressed the proper framework to apply to the employees’ participation in the social media discussion. The restaurant argued that the NLRB should apply its standards established in Atlantic Steel Co., 245 NLRB 814 (1979), which balance the following four factors: (1) the place of the discussion; (2) the subject matter of the discussion; (3) the nature of the employee’s outburst; and (4) whether the outburst was, in any way, provoked by the employer’s unfair labor practices. Focusing on the first factor (the place of discussion), the NLRB noted that it has traditionally applied the Atlantic Steel Co. standards to face-to-face communications in the workplace. The precedent is ill-suited to apply to employees’ off-duty, off-site use of social media to communicate amongst themselves and with third parties.

Instead, the NLRB relied upon the standards prescribed by the United States Supreme Court in NLRB v. Electrical Workers Local 1229 (Jefferson Standard), 346 U.S. 464 (1953) and Linn v. Plant Guards Local 114, 383 U.S. 53 (1966). In Jefferson Standard, the Court upheld the discharges of employees who publically attacked the quality of their employer’s product and business practices

without relating their criticisms to a labor controversy, which constituted disloyal disparagement outside the protections of the Act. In Linn, the Court limited the availability of state-law remedies for defamation in the course of a union organizing campaign to instances where the complainant “can show that the defamatory statements were circulated with malice” and caused damage. The NLRB concluded these cases offer the better framework to determine whether employee social media commentary, amongst themselves and reaching third parties, “is not so disloyal, reckless, or maliciously untrue to lose the Act’s protection.”

The NLRB made an important determination regarding the precise scope of the social media activity at issue. It held that the only conduct to be analyzed entailed Sanzone’s posting (“I owe money too. Such an [expletive deleted].”) and Spinella’s clicking of the “Like” button under the former employee’s initial comment posted on her Facebook page. The NLRB concluded that Spinella’s “Like” indication related only to the initial comment and was not an expression of approval of any ensuing comments, which he could have “liked” individually. The restaurant argued that Sanzone and Spinella should be held responsible for all of the comments in the social media exchange, some of which implied that the owners pocketed employee funds. Without deciding whether these other comments were protected, the NLRB found that neither Sanzone nor Spinella would lose the protections of the Act merely by participating in an otherwise protected discussion in which other persons made unprotected statements.

The NLRB emphasized several important aspects of the two employees’ social media activity. They participated in a Facebook discussion in relation to an ongoing labor dispute affecting them. The social media discussion, including Sanzone’s and Spinella’s participation, was not directed to the general public. Although the record did not make clear the privacy settings on the former employee’s Facebook page, the NLRB found that the social media discussions “were more compatible to a conversation that could potentially be overheard by a patron or other third party,” as compared to a statement directed to the public at large. The NLRB concluded that the two employees did not disparage their employer’s’ products or services, rather they engaged in social media to seek and provide mutual support for a group activity addressing the terms and conditions of employment.

In another important aspect of its ruling, the NLRB reviewed the restaurant’s Internet and blogging policy and found it to be in violation of the Act. The policy warns that “engaging in inappropriate discussions about the company management, and/or co-workers, the employee may be violating the law and is subject to disciplinary action, up to and including termination of employment.” Two of the three panel members, Kent Y. Hirozawa and Nancy Schiffer, deemed the policy to chill the exercise of Section 7 employee rights under the Act. Member Philip A. Miscimarra, while agreeing that the restaurant wrongfully terminated Sanzone and Spinella, disagreed with the finding that the policy violated the Act. The dissent concluded that the policy does not expressly or implicitly restrict protected Section 7 activity and, instead, aims to prevent the revelation of proprietary information and unlawful statements about the company, its management and employees.

Lessons from the NLRB’s ruling

Impulsive and emotionally driven employer reactions to workers’ unflattering, slang, “off the cuff” or even vulgar commentary on social media can lead to trouble under the Act. This is especially true where the employer is aware of or can easily construe that the employees turned to social media to address workplace issues and further their exercise of protected Section 7 rights.

Of particular significance and forging new ground, NLRB’s ruling makes clear that the simple act of clicking “Like” on Facebook without doing anything else or saying anything more can constitute protected participation in concerted activity. A “Like” clicking may express agreement with commentary regarding an ongoing workplace concern as was the case with Spinella’s action, rather than be evidence of disloyalty as his employer contended.

Further, the ruling makes clear that an employer faces a high burden to prove that social media comments are “so disloyal, reckless, or maliciously untrue” such that they may lose their protection under the Act. Employers will need compelling, persuasive and credible evidence to have any prospect of success regarding such a depiction of a social media commentary.

Finally, employers should review their social media policies to ensure that they are in compliance with the Act. While the NLRB panel split in its review of the policy at question in the Triple Play case, employers must make certain that their policies’ terms and restrictions are not so ambiguous and broad such that they can reasonably be construed to reach and impair protected concerted employee activity under Section 7 of the Act.

The NLRB, as well as courts, will continue to speak about the impact of social media as it pervades workplace issues. We will monitor these developments closely and proactively report on them, as social media impacts the delicate balance between employees’ rights and employers’ business concerns.

For more information on the content of this alert, please contact your regular Nixon Peabody attorney or: